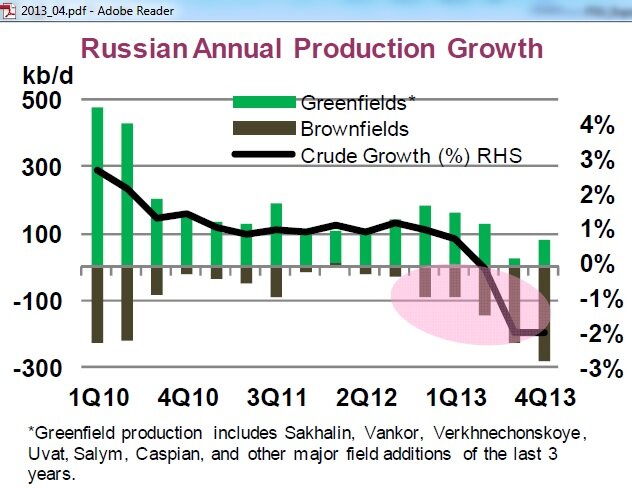 The Druzba pipeline was put in operation in 1964, connecting oil fields in West Siberia, the Urals and the Caspian Sea with refineries in Poland, Czechoslowakia, East Germany and Hungary.  More details: http://en.wikipedia.org/wiki/Druzhba_pipeline

There is a huge variation in monthly crude exports but the trend is clear:

We see that total crude imports peaked in 2005, declining since then at -3.2% pa. Imports from Russia in 2011 were 7% lower over 6 years (-1% pa), but rather flat since 2009. So it appears that there is a general trend in declining imports caused by high oil prices rather than a direct impact of Russian export decline.

Historic flashback about the peaking of West-Siberian oil fields in the 1980s:

Total product exports increased by 100 kb/d since 2010, as fuel oil exports are increasing.

This is the result of Russian tax laws favouring product exports which are taxed less than crude oil:

Note that total crude and product exports have peaked while total oil supplies have still been increasing. This is because an oil boom generates more domestic demand for oil resulting in less exports

GDP growth rates in the FSU have been higher before the GFC between 5% and 9%.

But Russia’s oil production growth seems to come to an end due to decline in existing fields and a lack of new fields coming on stream:

Here is an example of the decline in a legacy field like Samotlor, it’s -4% pa 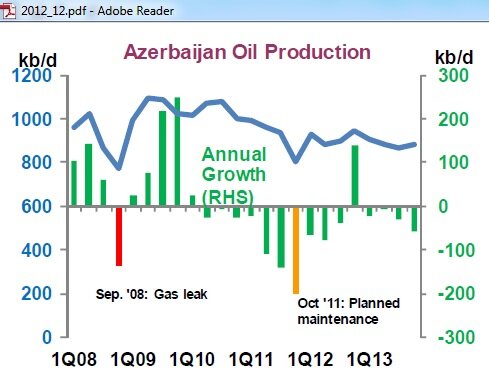 especially in the ACG field (75% of Azerbaijan’s output)

On Kazachstan, the IEA writes in its March 2013 report:

“In Kazakhstan news reports indicate that despite operator and government hopes that Kashagan’s output could begin as early as April, the field is not expected to begin commercial production until June, in line with our expectations. Kazakhstan’s oil output is forecast to grow by only 30 kb/d in 2013 to 1.65 mb/d despite the startup of the 350 kb/d Kashagan field due to planned maintenance at the Tengiz field this summer and due to mature field decline.” 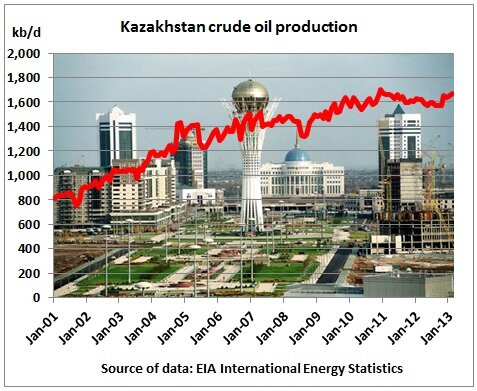 Background: Astana. An oil boom comes along with a construction boom

Russia is at its 2nd and last oil peak. The easy oil is gone. The FSU export peak comes ahead of the production peak. Some oil importers can manage a 2-3% decline rate for some time. But watch out for those export decline rates when the many small green fields can no longer offset decline rates of legacy brown fields running at -4% pa and local demand still growing.